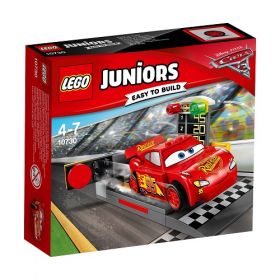 This speed launcher set features the main character of the movie and is just what you need to start your child off with their first Cars set.

The set comes with a race leaderboard showing the position and car number along with lights to start or end the race, a custom designed starting ramp with launch function to help Lightning McQueen shoot off by pressing the big red button.

Included is an easy to follow guide on how to build and play, and larger pieces to help build confidence in toddlers until they get old enough. LEGO® Juniors is a recommended build and play experience for ages from 4 to 7.

There are many other Disney Pixar Cars 3 sets to collect. Don’t forget to check those out also and build up your Cars universe with these colourful and funny characters!

Includes a Lightning McQueen LEGO Juniors character with all the racing stickers just like in the real movie!

Why wait to purchase the Lightning McQueen Speed Launcher today?

Fast postage. Packaged perfectly. Excellent service. Very happy with purchase. Will definatly use your online store again. Much appreciated.
Charmaine
Have purchased many large ticket items all with great service and reliability. Quick to reply to questions regarding stock etc.Thanks again Patty !!
John
view all