in Australia
100% Australian Owned and Operated
Lego Group’s
Independent Retailer 2016
100% PCI
Secure Website
AU$5.95
Flat Rate Shipping
COVID 2019
We are currently experiencing significant delays due to COVID19 processes in place around the country, so we expect longer internal processing time and longer Australia Post In-transit Times than standard delivery times. In some cases around Australia, up to 3 weeks delay.
EXPRESS POST orders are also affected by the delay and are not next day delivery to Metro areas.
Please do not order online if you are expecting delivery within our normal time frames. We do not refund/cancel/compensate postage for orders for late delivery during COVID19. 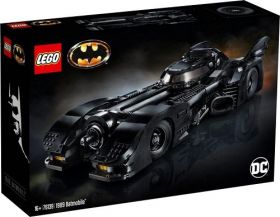 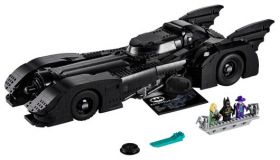 Batman™ fans and anyone who appreciates cool cars will love the LEGO® DC Batman 76139 1989 Batmobile™ model car kit for adults. This beautifully detailed LEGO brick building toy replicates the classic curves of the famous Batmobile car, as seen in the 1989 Batman movie. Measuring over 60cm long and built from 3,306 pieces, the model offers a challenging and rewarding build. Die-hard fans will love authentic features such as the slide-open cockpit with a new-for-November-2019 wraparound windshield element, 2 hidden machine guns with a pop-up function activated by turning the turbine exhaust, and decorative grappling hooks on each side of the vehicle. The Batman toy car comes with a rotating display stand (with an attached information plate with 1989 Batmobile™ statistics) for ease of viewing from any angle. A must-have for all Batman fans, this super-hero toy construction set also includes 3 new-for-November-2019 minifigures—Batman with a cape that matches his 1989 movie outfit, The Joker™ and Vicki Vale™—plus a brick-built minifigure display stand.

Excellent service & the package arrived next day with express.
Thank you Patty!
Brendan
Have purchased many large ticket items all with great service and reliability. Quick to reply to questions regarding stock etc.Thanks again Patty !!
John
view all