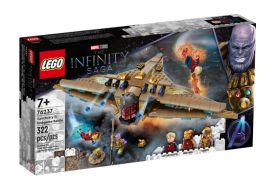 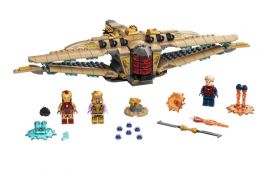 Put a kid’s passion for the Marvel Cinematic Universe on show for all their friends to admire. The LEGO® Marvel Sanctuary II: Endgame Battle (76237) is packed with realistic details to inspire imaginative play and impressive displays.

Detailed spaceship and iconic characters
The 4-winged Sanctuary II spaceship, with its menacing array of 6 stud shooters, puts Marvel movie action into kids’ hands. The spacious cockpit opens to reveal a pilot’s seat and instrument panel from where the mighty Thanos controls the ship. Down below in the cargo room sits the Infinity Gauntlet. The set contains 3 minifigures: Iron Man, with blue power blasts and a shooter; Captain Marvel with fiery power blasts and a shield; and Thanos, with a golden helmet and double-bladed sword. Solid side rails make it easy for kids to grip and manoeuvre the large craft as they recreate scenes from Marvel Studios’ Avengers: Endgame and enjoy imaginative adventures of their own.

So why not buy the Sanctuary II: Endgame Battle today?

Thanks Patty Excellent service and very professional already purchased my second item looking forward to buying more products in the near future.
Bevan Rankin
Only place I buy Lego from. Only place where you can get large range of Lego items and the latest Lego at a great price. Recommend the site to all my friends. Also great customer service on phone.
Dajana
view all