in Australia
100% Australian Owned and Operated
Lego Group’s
Independent Retailer 2016
100% PCI
Secure Website
AU$5.95
Flat Rate Shipping
COVID19 SYDNEY LOCKDOWN
Due to the Sydney lockdown, we are suspending our pickup service from the Silverwater warehouse until the restrictions lift.
Online orders will continue to be processed.
Thank you for your patience. Stay safe.
Home/LEGO® Products/Ninjago/71738 LEGO® NINJAGO® Zane's Titan Mech Battle
22 of 36 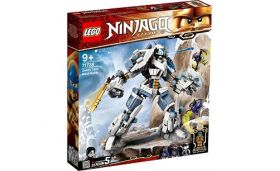 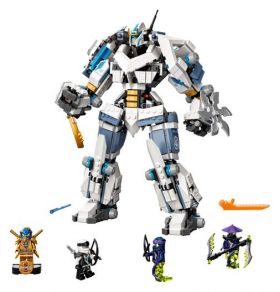 Get young ninja fans role-playing exciting scenes from season 5 of the LEGO® NINJAGO® TV series, with this Zane’s Titan Mech Battle (71738) Legacy set. Featuring posable legs and arms, a sword and spinning chainsaw in its hands, plus 2 spring-loaded shooters and a cockpit for ninja minifigures, kids will love this modern update of the original mech.

Hours of fun for passionate NINJAGO fans
This ninja toy features 4 minifigures: ninjas Zane and Jay Legacy plus 2 Ghost Warriors Ghoultar and Soul Archer, all armed with cool weapons including a bow and arrow and scythe to inspire endless NINJAGO battling fun. New for January 2021, Jay Legacy is a special golden collectible minifigure to celebrate 10 years of NINJAGO toys.

Top gifts for imaginative kids
NINJAGO building toys open up a world of exciting adventures for kids. Little ninjas can team up with their heroes to battle a cast of evil villains as they role-play with an amazing collection of cool toys including dragons, mechs and temples.

Why not buy the Zane's Titan Mech Battle today?