in Australia
100% Australian Owned and Operated
Lego Group’s
Independent Retailer 2016
100% PCI
Secure Website
AU$5.95
Flat Rate Shipping
COVID 2019
We are currently experiencing some delays due to COVID19 processes in place around the country, so we expect longer internal processing time and longer Australia Post In-transit Times than standard delivery times. In some cases around Australia, up to 1 week delay.
EXPRESS POST orders can also be affected by the delay and are not next day delivery to Metro areas.
Thank you for your patience. Stay safe.
Home/New Arrival/70838 LEGO® MOVIE 2™ Queen Watevra's ‘So-Not-Evil' Space Palace
360 of 523 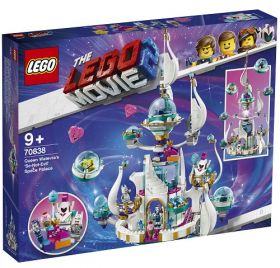 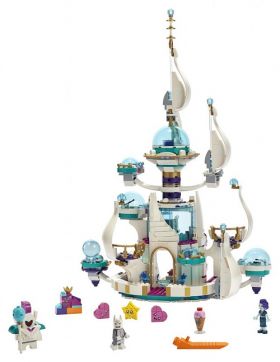 Create out-of-this-world adventures with a space palace toy from THE LEGO® MOVIE 2™!

Cosmic action awaits children as they build 70838 Queen Watevra’s ‘So-Not-Evil’ Space Palace and role-play with their favorite THE LEGO® MOVIE 2™ characters. This colorful LEGO palace toy features a rotating top section with an opening, detachable rocket for Queen Watevra Wa'Nabi, detachable pods for other characters, security room, detailed dining room and a DJ booth for creative play. A great building kit for kids and all fans of THE LEGO MOVIE 2 who will love reimagining their favorite scenes and making up their own stories with a minifigure, mini-doll figure and 6 brick-built figures.

So why not buy the Queen Watevra's ‘So-Not-Evil' Space Palace set today?

I have been buying Lego from just bricks for years. They are fabulous. Never had a problem, prompt delivery and regular communication regarding deliveries.
Sue Burnet
Ordered 4 Star Wars models to build for grandsons birthday/Christmas. Have never bought from Just Bricks before. I will be buying all my lego from here from now on. Great range, quick delivery. Very impressed. Thanks Ali
Ali Smith
view all