in Australia
100% Australian Owned and Operated
Lego Group’s
Independent Retailer 2016
100% PCI
Secure Website
AU$5.95
Flat Rate Shipping
COVID19 SYDNEY LOCKDOWN
Due to the Sydney lockdown, we are suspending our pickup service from the Silverwater warehouse until the restrictions lift.
Online orders will continue to be processed.
Thank you for your patience. Stay safe.
Home/New Arrival/71393 LEGO® Super Mario™ Bee Mario Power-Up Pack
445 of 644 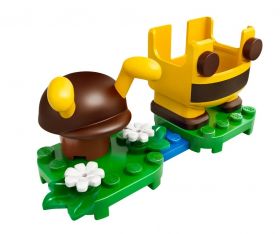 Bring an extra buzz of excitement to the LEGO® Super Mario™ play experience with this Bee Mario Power-Up Pack (71393). It features an interactive bee suit for LEGO® Mario™ (figure not included), which gives the player a chance to earn extra digital coins for ‘flying’ and triggers buzzing-bee sounds. This set makes a super gift for trend-setting kids who own the LEGO Super Mario Starter Course 71360 set, which includes LEGO Mario, or the 71387 set, which includes a LEGO® Luigi™ figure.

Fun app
Find illustrated building instructions in the pack and on the free LEGO Super Mario app. The app also offers a safe forum for children to share their ideas, inspiration for ways to build and play, plus other fun features.

So why not buy the Bee Mario Power-Up Pack today ?