in Australia
100% Australian Owned and Operated
Lego Group’s
Independent Retailer 2016
100% PCI
Secure Website
AU$5.95
Flat Rate Shipping
COVID 2019
We are currently experiencing some delays due to COVID19 processes in place around the country, so we expect longer internal processing time and longer Australia Post In-transit Times than standard delivery times. In some cases around Australia, up to 1 week delay.
EXPRESS POST orders can also be affected by the delay and are not next day delivery to Metro areas.
Thank you for your patience. Stay safe.
Home/New Arrival/75256 LEGO® STAR WARS® Kylo Ren's Shuttle™
452 of 575 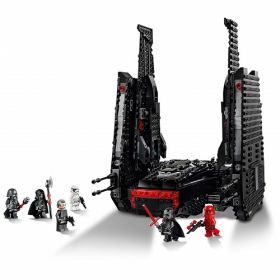 Play out space-faring LEGO® Star Wars™ adventures with 75256 Kylo Ren’s Shuttle. This brick-built version of the Supreme Leader’s personal transport ship from the Star Wars: The Rise of Skywalker movie has lots of details to excite kids and collectors alike, such as a rotatable right engine for folding in the wings when landing and the ability to shorten the wings by folding the top part down. There's also an opening access ramp, 2 spring-loaded shooters and a cockpit with space to sit Supreme Leader Kylo Ren and 2 minifigures behind. As well as the Supreme Leader, this great LEGO Star Wars ship also includes General Pryde, a Sith Trooper, First Order Stormtrooper and 2 Knights of Ren for instant play action.

So why not buy the Kylo Ren's Shuttle™ set today ?

Excellent! The professionalism of this company is outstanding. Totally reliable, best delivery time ever, and best product of course.
Meta Ransome
Damn fast service....ordered a kit at lunchtime Wednesday and it arrived first thing next morning. Good range of Lego kits...I will be a ordering more :)
Alois T
view all