in Australia
100% Australian Owned and Operated
Lego Group’s
Independent Retailer 2016
100% PCI
Secure Website
AU$5.95
Flat Rate Shipping
COVID 2019
We are currently experiencing some delays due to COVID19 processes in place around the country, so we expect longer internal processing time and longer Australia Post In-transit Times than standard delivery times. In some cases around Australia, up to 1 week delay.
EXPRESS POST orders can also be affected by the delay and are not next day delivery to Metro areas.
Thank you for your patience. Stay safe.
Home/New Arrival/75263 LEGO® STAR WARS® Resistance Y-wing™ Microfighter
454 of 575 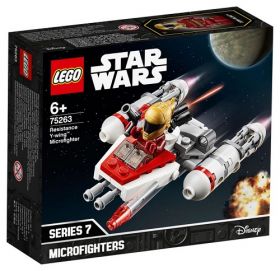 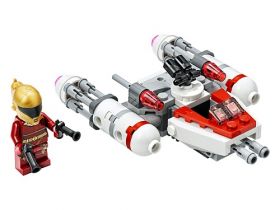 Give your youngster an inspiring introduction to LEGO® Star Wars™ construction toy playsets with this easy-to-build Star Wars: The Rise of Skywalker Resistance Y-wing Microfighter (75263). Featuring a new-for-January-2020 red and white color scheme, the Y-wing fighter also has flick missiles and a rotating gun turret for battle action. Kids can also role-play as a heroic Resistance pilot with the Zorii Bliss minifigure. Go digital! This building toy is a great gift idea for young LEGO Star Wars fans and Instructions PLUS, available in the free LEGO Life app, offer an exciting, interactive way to build it. With zoom and rotate viewing tools to help them, even rookie builders get a feeling of independence… and Jedi-level awesomeness! Welcome to the LEGO Star Wars universe Since 1999, the LEGO Group has been recreating iconic starships, vehicles, locations and characters from the Star Wars universe. LEGO Star Wars is now its most successful theme with something for all ages. What's not to love?

So why not buy the Resistance Y-wing™ Microfighter set today ?

Excellent! The professionalism of this company is outstanding. Totally reliable, best delivery time ever, and best product of course.
Meta Ransome
Damn fast service....ordered a kit at lunchtime Wednesday and it arrived first thing next morning. Good range of Lego kits...I will be a ordering more :)
Alois T
view all