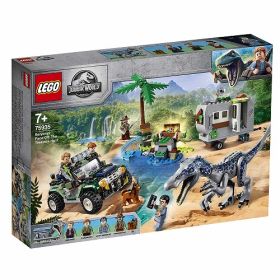 Drama awaits kids as they help Owen Grady and Claire Dearing pursue bad guys through the jungle in LEGO® Jurassic World 75935 Baryonyx Face-Off: The Treasure Hunt. This action-packed dinosaur playset features an offroader with space for 2 minifigures and an attachment point for a trailer which has a buildable rooftop antenna and a detailed interior, plus a buildable jungle scene that has a hidden treasure chest with a reveal function. It also includes a posable Baryonyx dinosaur figure and 4 minifigures with cool weapons and accessories to inspire imaginative play.

So why not buy the Baryonyx Face-Off: The Treasure Hunt set today ?

Fast postage. Packaged perfectly. Excellent service. Very happy with purchase. Will definatly use your online store again. Much appreciated.
Charmaine
Thank you for the support and giving me the chance to give my Son a leg up in the world of robotics and most importantly, his education. You'll be seeing us again. Thank you again.
A Caulfield
view all